I almost forgot about this. I found these a while ago and it suddenly seems appropriate for the season. There is still time to get this before Christmas.

Madd Maxx Car Art offers prints and t-shirts with a Mustang LX Convertible that can be viewed as a radical interpretation of the Feature convertible. They are available in many colors including Yellow and White and have a spoiler on the trunk lid. Hopefully they don’t mind me referencing the images here since this is free advertising for them.

The shirts are available on this page: http://www.1maddmax.com/md140MustangLX93.html

And, the prints here: http://www.1maddmax.com/MW140MustangLX87.html

All in the course of a few days, three things happened
that made me feel real good about my Feature car. This is good because
I have been thinking a lot lately about the 2005.

The first thing that happened was that I got the January
2005 issue of Mustang Monthly. In it is a how-to article on “Fox-body
Restoration Tips”. 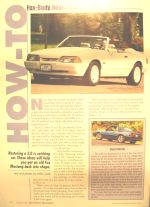 In the introduction, it states:

The article later states in its conclusion:

This is important recognition from a great Mustang magazine. Miles
Cook who wrote the article is well respected and has also written
several other articles devoted to the feature car convertibles.
It seems that feature convertibles are close to or already being
considered collectible.

The second two things that happened were two emails I received
a day apart from two people at the opposite ends of the feature-car
spectrum. One was from Franky. He recently purchased a white 1993
Feature convertible with some popular modifications such as flowmasters,
cold air intake, an aftermarket stereo and it was lowered. These
are all pretty acceptable fox-body upgrades. The thing is that Franky
is reversing them. He has already gone back to OEM springs and has
removed the CAI changing it back to stock. He is now in the process
of changing the aftermarket stereo back to the AM/FM/cassette that
was standard in 1993. This is something I always thought happened
only to older Mustangs than the one I own. Cheers Franky.

Opposite Franky is Josh. He is currently finishing an 800HP monster.
Prior to his latest set of mods, he had a turbo on the stock block
with the original AOD. Running in the low 11's wasn't good enough
so he is now rebuilding it with a 347 stroker, twisted wedge heads,
font coil over set up, manual rack, comp C-4, 8.8 with 411's, 33
spline axles and a lot more goodies.

We all think about making our pony car a little faster
but, damn, that thing pushes the fox to the limit. I hope he sends
video from the strip when he finishes it!

With the 2005 Mustang in showrooms what Feature car
owner isn't thinking of a way to get one. If that way involves unloading
your Feature car, think again. I certainly am.