I just got the July 2006 issue of Mustang Times, the magazine of the Mustang Club of America and it had an article on the last show I attended. As I looked through the pictures included in the article, I was pleased to see that my car was there! It was a one page article with several shots from the show. 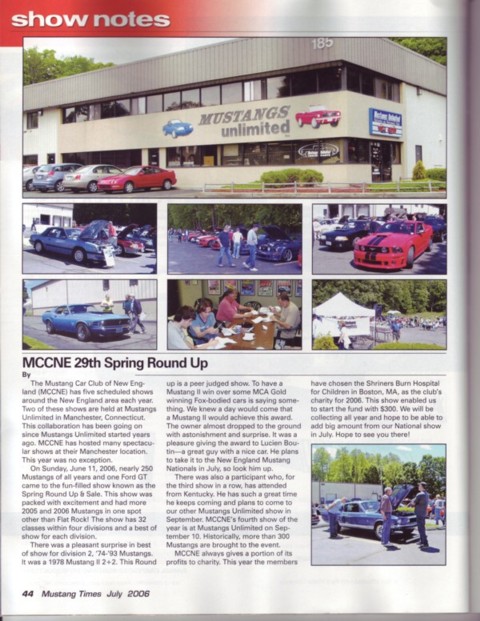 Well, what do you mean, you don't see my car? It's certainly there. Maybe you should take a closer look. Here's a hint as to where you should look. 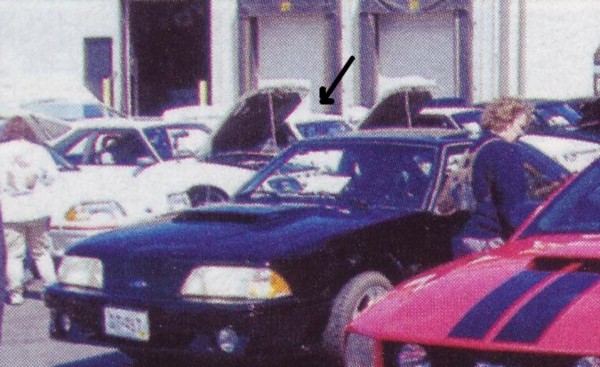 Now, you can't miss it, right?

Ah well, maybe now I can say my car appeared in a magazine even if it was only the hood, windshield and trunk lid. Seriously, it was nice to see coverage of the show in this magazine. The Mustang Times has been criticized in the past for too much focus on the South. It's nice to see that they really do have equal coverage of the country when they cover our "little" show.

I recently received the July 2006 issue of Mustang Monthly in the mail. There is an article on a yellow/black 1993 feature car. It's all stock with under 5,000 miles. I love cars like that. They really help to preserve the history of Mustangs. The article includes some nice pictures including a big one spread across the two page table of contents.

Best of all, the article references this web site for more information on feature cars. This is the second or third time it has done so and it is incredibly flattering. I am a huge Mustang Monthly fan. It's the only Mustang magazine I subscribe to and I've been a subscriber since around 1988/89. I started to subscribe when I was in college. At the time, I was a Mustang fan but did not own one. My brother, who knew I liked Mustangs, was going to the same college as I. One day he made a trip to the mall with his friends and, for some reason, decided to pick me up a couple of Mustang magazines. One was an issue of M.M. Before that, I had never read any Mustang magazine. After he dropped them off in my dorm room, instead of studying like I should, I spent the whole evening reading the two magazines. I was mesmerized by the stories of the various cars, their owners and their histories. I subscribed shortly afterward.

I enjoy other Mustang magazines but Mustang Monthly seems to be oriented more to the purist of which I consider myself one. Don't get me wrong, I enjoy reading about and seeing outrageously customized cars as much as the next guy but I also appreciate and thoroughly enjoy the history of the cars.

I think its awesome that this magazine that I hold in such high regard has returned the favor. Thanks, Mustang Monthly!